The Nature of Hurricanes 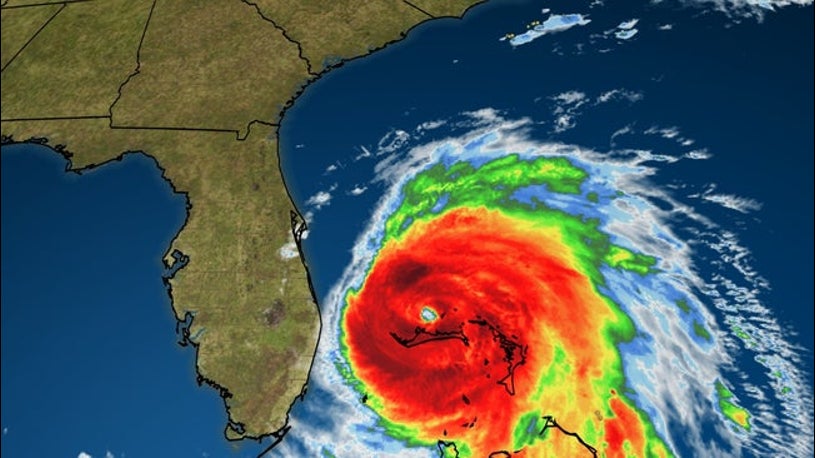 Since the world is watching monster hurricane Dorian today, and waiting to see if it will make landfall on the east coast of the USA, I thought I would post a piece I wrote about hurricanes that I wrote some years ago when I was living in Florida and experiencing hurricanes for the first time.

While hurricanes are considered a disaster for humans, they play an important role in nature.

Since we are in the midst of hurricane season here, I thought I would post my nature viewpoint about hurricanes. This has been a slow year for hurricanes, but a few years ago, we had four hurricanes in six weeks coming straight towards us on the west coast of Florida.

Hurricanes play an important role in nature. They act as safety valves and balance the earth's climate by exchanging vast amounts of heat and cold between the equator and the poles, and from upper to lower atmospheres. Without hurricanes, air at the equator would continue to get hotter and hotter, air at the poles would get colder and colder, and our planet would become unlivable. Hurricanes also bring much-needed rain to parched regions and recharge underground aquifers.

Hurricanes have a major function to release heat from tropical waters. During Hurricane Frances, the water temperature in the Gulf of Mexico went from 87 degrees F to 79 degrees F in two days. Nature is full of these balancing mechanisms that kick in to keep conditions on the planet from getting too hot or too cold.

When warm water evaporates from tropical seas, great amounts of energy are created. This energy is stored in hurricanes as latent heat in the water vapor, which form the great towering clouds circling the hurricane eye. About 90 percent of heat gathered from the tropical seas is dissipated through the hurricane when the vapor expands, cools, and condenses into rain.

Because hurricanes need warm water to form, they originate only in warm sunny seas in two general areas north and south of the equator. They start as small disturbances of gently whirling winds and slightly lower air pressures, which are then given a spiral twist from the rotating earth. Young hurricanes travel slowly at first, somewhat parallel to the equator, pulling in more and more moisture-laden air into the core. The immense amounts of energy from warm moist air and certain conditions of wind and air pressure deepen the intensity of the storms into full-fledged hurricanes with winds from 74 mph to nearly 200 mph. These masses of hot swirling air are pulled like magnets toward either the North or South Pole, traveling in great sweeping curves before losing their energy and dying out over colder regions.

Hurricanes begin to weaken and die when either of their energy sources—warmth or moisture—is diminished. Over land, the storm cannot obtain enough moisture; in latitudes higher than 40 or 45 degrees, it cannot obtain enough warmth. When the source of energy disappears, the winds decrease in speed, gradually the eye fills with clouds, and the great fury of the storm begins to wind down.

In 2004, as Frances approached, I watched out the window for her coming.

I noticed that I was doing things like pulling out info on how to recognize wind speeds by their physical manifestations and determining wind speeds by natural observation, while on television the reporters—who were meteorologists!—couldn't determined wind speed without their handheld anemometers (make your own simple anemometer)

Branches on the large oaks in motion: 25-31 mph

Twigs and branches breaking and flying through the air: 39-46 mph GALE FORCE!

Fortunately, that was as far as it went. [Here's the entire Beauford Wind Scale]

Here in Florida, we live in a place where hurricanes are just part of the place. Something we need to learn to live with. Not to be the effect of, but to be cause over.

After hurricane Charly, Larry and I went down to Port Charlotte to volunteer to do hurricane relief, and we saw first hand the destruction that can be caused when a full-blown hurricane makes a direct hit. Especially to mobile homes, of which there are many here. They just get completely blown away.

I saw on television how in the Bahamas, they know about hurricanes, expect them, and design their world around them. I saw how a restaurant owner took up his floorboards so the water could flow through the crossbeams, letting it flow instead of having the water break apart the whole floor to get through. After Frances passed through, they showed him nailing his floorboards back down and the next day he was back in business. For the restaurant owner, the hurricane was just a passing thing, part of life, not a "disaster".

Throughout the world, buildings have always been built around the conditions of place--this is called "vernacular architecture." Except that now, in America, we build buildings not suited to their surroundings at all, so of course, they are destroyed when the natural conditions of the place occur. There is starting to be a change here in Florida. New homes are starting to be built that consider floodwaters and hurricane winds. Many new homes in flood areas are built as two stories, with parking on the ground floor and the house on the second floor. But mobile homes are just completely inappropriate.

In Key West, I saw houses over 100 years old that have withstood many hurricanes. They are built in a special way about a foot off the ground, with open vents so the wind can blow under them and leave the house standing.

Walking through the back garden door to my house, one day after the 2004 hurricanes, I noticed the purple passionflower vine climbing over the door was filling in nicely with new leaves and flowers. Two months previous, it had been stripped bare by the ravenous caterpillars of the Gulf Fritillary butterfly. But now it was coming back, even more lush and beautiful. Destruction opens the way for new growth.

Charley and Frances were my first hurricanes. I learned a lot from them. I no longer fear hurricanes and know what to do now to be ready. As a Girl Scout, I learned the motto “Be Prepared.” An old Persian proverb says “Trust in God, and tie up your camel.” The more preparation we make, the more our valuables are protected, the less fear we have of the unpredictable that happens around us. But even so, I’ve learned that when I let go of the old, the new that comes is often much much better.